Blessing of the New Buildings in Sasudong 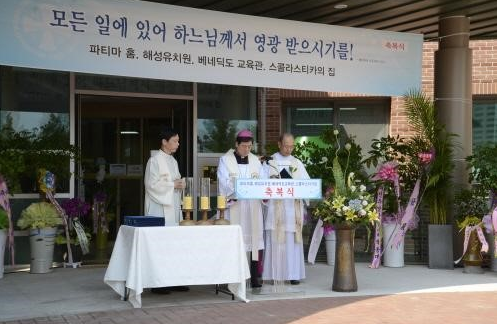 On Friday May 29, 2015, our rector, Reverend Father Dionysius Park, OSB, the community of our sisters, benefactors, and construction contractor and engineers, architect designers, members of oblates, parishioners, Kindergarten students, nursing home residences and employees were assembled at the front of the new buildings and the Most Reverend Archbishop Thaddeus Cho Hwan-Kil, Archbishop of Daegu blessed our new buildings: the Nursing Home (Fatima Home), new Haeseong Kindergarten and Benedict Education Center (Spirituality Center and Oblates Office), and the Elderly Sisters Home (Scholastica House).

After the blessing ceremony, the Prioress Sr. Lumen Choi gave address and presented the appreciation plaque to three persons: First to Mukwon Kim, the Director of the Hyundae Architect Design Company who designed the beautiful, practical, and convenient buildings with thoroughness, earnestness and total responsiveness; second to Hongjung Lee, the President of the Hwaseong Corporation who assisted generously to construct the strong and durable buildings; third to Bangsu Chang, the Construction Manager and the related persons who attended in supervision of the buildings as their own houses during one and half years.