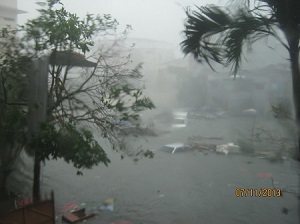 Dear Sisters, administrators, faculty, staff, students, parents, alumni of our Benedictine schools, and friends all over the world,

Twelve days after the deadly super typhoon struck and flattened Tacloban City and neighboring areas, it is only now that I have the time, courage and strength to write and express my gratitude for the outpouring of love and support you have shown for our suffering people. Our endless gratitude to all of you wherever you may be.

On the night before the typhoon struck, we had 159 patients (7 of them in the ICU) at the Divine Word Hospital in Tacloban City. We were 16 Sisters in all living in the third floor of one of the hospital buildings at the time of the calamity. Our hospital Sisters’ community expanded to this size because the Sisters assigned at St. Scholastica’s College-Tacloban decided to move to us some minutes before the strong winds came. Had they not done so, one or the other could have perished since their convent was 75% destroyed!

It is common knowledge that at the height of the typhoon and immediately after the aftermath, Divine Word Hospital was the only medical facility left in operation since the other hospitals were severely damaged. We salute our resident doctors, nurses and staff who were on a round the clock, non-stop duty attending to all the victims of the typhoon.

On that Friday morning of November 8 when the terrifying winds struck the hospital, all the air conditioning units in the patients' rooms were literally flown down to the floors. We were blessed that no one was hurt. Some rooms had broken glass windows and even broken doors. All the patients were wheeled out of the rooms and into the corridors where they could be safer. As soon as the patients were settled in the corridors, the Sisters led the praying of the rosary to calm our fears.

On Sunday, November 10, we had to discharge all the patients without asking for payment of their hospital bills. We had no more running water, electricity, medicines and food. However, many of them still stayed in the hospital for some more days because there was no transportation or no more homes to return to. On the other hand, treatment for emergency cases of victims of the typhoons never ceased. Since our emergency room in the ground floor was flooded, the lobby in the second floor became the emergency room, full of bleeding patients. Ten patients died, including two in the ICU who died when the life support were cut off due to power failure.

For two days we were totally cut off from the rest of the world because no communication lines functioned. UNICEF was then able to set up a center near the Police Station where people could make free calls and have internet access. There I lined up with two other sisters just to communicate with our Mother Prioress to assure her that we were all safe and to give her a list of needed medicines and medical supplies for our patients.

Two of our buildings were unroofed, ceilings and electrical wirings were destroyed. Expensive laboratory equipment, vehicles, laundry equipment and generators were soaked in water that destroyed them. Our hospital floors were littered with broken glasses and our grounds with debris and fallen trees. Our hospital staff continued to work under limited conditions – with little light and water.

Around us the scenes we saw were hard to take, the destruction and suffering were beyond description. People walked in the rubble stunned and dumbfounded. Much tears flowed, pain could not find speech.In the midst of the immense darkness of the landscape, rays of light shone. It came from good hearts – hearts that cared – and it reached us! Relief goods, medicines, financial help and various forms of solidarity and support coming from all over the country and the whole world pierced through the darkness and gave us hope and joy. YOU were among those who responded in our time of need.

YOU are this ray of light. In the confusion and chaos during the first days of the arrival and retrieval of relief goods coming to Tacloban, we received the first five boxes (the rest of them retrieved at a later time) from St. Scholastica’s College, Manila’s relief operations. They were 2 boxes of IV fluids, 2 boxes of Nips chocolates and a box of Bear Brand milk choco. The Nips were our supper for the night and what saved us in the succeeding days when hunger came. To you who donated the Nips, please know what it meant to us and how it became a symbol of hope. Please know that no action is small in a situation of life and death.

For us who believe, destruction and death are not last the words but HOPE in a loving God who works through His people like all of you. In behalf of our community in Divine Word Hospital and St. Scholastica’s College, Tacloban and all the suffering people of Tacloban and other affected areas, our prayers and gratitude. God bless and reward you a hundredfold. Your goodness and your compassion will be our inspiration rising up again.